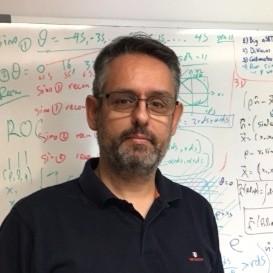 George Kastis was born in Leros in 1971. He studied Physics (minor in Mathematics) at the University of California Irvine (UCI), where he graduated in 1994 with a GPA of 3.92/4.00 (Magna Cum Laude and Honors in Physics). Also, as a third year student, he was awarded the Herbert H. Chen Award, awarded to the best junior student of the Department of Physics. His Honor’s thesis led to an article titled “Time-Resolved Measurements of Shock-Waves and Cavitation Bubbles Generated by Femtosecond Laser Pulses in Bovine Cornea and Water” which was published in Lasers in Surgery and Medicine and has acquired more than 210 non-shelf citations. In 1997 he obtained a M.Sc. in Optical Sciences from the Optical Sciences Center of the University of Arizona, with a GPA of 3.75, and in 2002 he obtained his Ph.D. from the same department (GPA of 3.83). In his Ph.D. thesis, under the supervision of Harrison H. Barrett, he employed semiconductor detectors to construct the first SPECT/CT scanner for small animals with a resolution of 380 μm. During his PhD studies, he received a three-year scholarship from the Onassis Foundation, an annual scholarship from the University of Arizona and many other awards.

From 2002 to 2003, he was a Research Associate at the University of Arizona's Department of Radiology, where he was funded by the United States National Institute of Biomedical Imaging and Bioengineering (NIBIB) to organize a conference entitled "Workshop on Small-Animal SPECT".

After his return to Greece, he worked as an Instructor at the Merchant Marine Academy of Aspropyrgos (2005-2006), as an Instructor at the Technical NCO Academy (2006-2007), as a Scientific Associate at the National and Kapodistrian University of Athens), as Postdoctoral Researcher at the Thorax Foundation (2005-2008) and as Lecturer at the Hellenic Air-Force Academy (2008-2009). From 2009 to 2014, he was a Researcher-Assistant Professor level at the Research Centre of Theoretical and Applied Mathematics of the Academy of Athens (KETHEM). In 2014, he was promoted to Researcher-Associate Professor level and in 2019 to Researcher-Professor level at the same Center. Since 2009 he is the Acting Director of KETHEM.

He has many years of experience in SPECT and PET imaging of small animals, reconstruction and image optimization in medical imaging, creating imaging protocols and evaluating new radiopharmaceuticals. He has published 21 articles in international peer-reviewed journals with more than 830 non-shelf citations (Google Scholar, h-index = 13, i10-index = 16). He is currently supervising a doctoral thesis and is a member of the advisory board of two other doctoral candidates. He was the supervisor of one PhD thesis and he has participated in the examining committee of 4 postgraduate diploma papers and has supervised a practical training. During his stay in the USA, he participated in five NIH programs and received funding for a conference by the National Institute of Biomedical Imaging and Bioengineering. In Greece, he has participated in 4 funded projects (3 of the Research Committee of the Academy of Athens and one by the Onassis Foundation). He is currently the Scientific Coordinator of three programs.

He has received 16 honors and awards. The most important was the second place award in the field of basic research from the Journal of Nuclear Medicine for his article entitled “Quantitative Analysis of Acute Myocardial Infarction in Rat Hearts with Ischemia-Reperfusion Using a High-Resolution Stationary SPECT System”. He has been awarded five scholarships, including a three-year scholarship from the Onassis Foundation and an annual scholarship from the University of Arizona. He has given many invited talks at universities and research institutes in Greece and abroad and has participated in 30 national and international scientific conferences. He was a member of the Scientific Committee of two conferences (BIOMEP 2017, Onassis Health Day 2019), a reviewer in 11 scientific journals, and a reviewer in national research programs (NSRF 2014-2020) and international organizations (NSERC Canada).