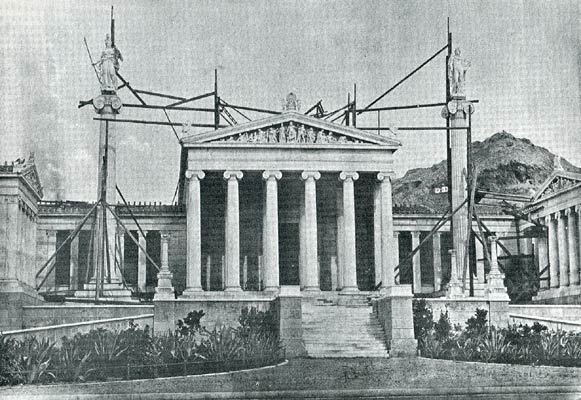 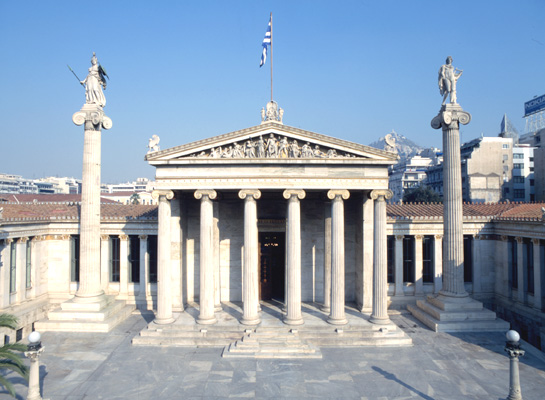 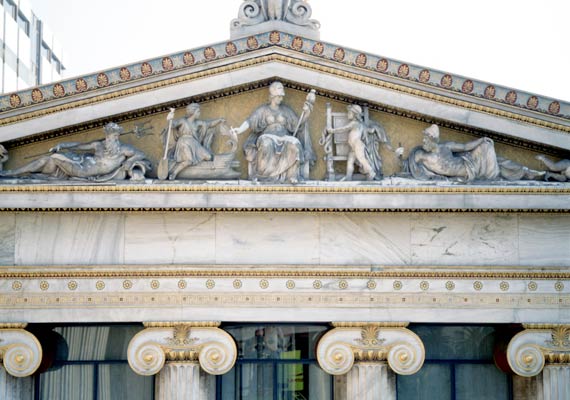 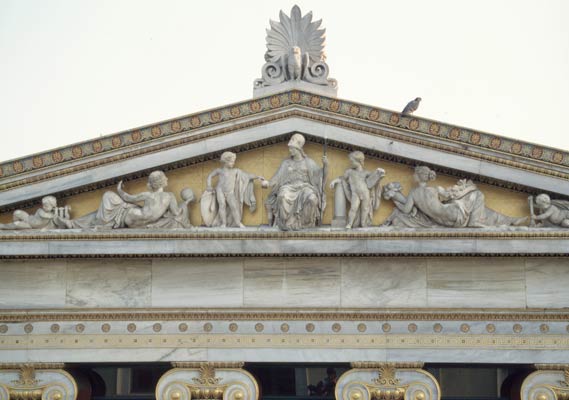 Fashioned out of fine marble, the facade of the Building of the Academy of Athens, faces Panepistimiou Avenue. One side faces the University of Athens and the other two face the garden of the Academy, which extends north to Akadimia Avenue and east to Sina Street.

The Building consists of a central part with two wings, and displays characteristics of the Ionian rhythm. Its central part is designed along the lines of an amphiprostyle temple.
It is generally acknowledged by both Greek and foreign experts that the Building of the Academy of Athens constitutes one of the most exquisite neoclassical buildings worldwide. The Academic Anastasios Orlandos, has emphasized that:

The secret of its (the Academy's) beauty lies not only in its harmonious lines and in the successful proportions of the Ionian components, but also in its shape, which is that of a decumbent Pi (Π); this arrangement creates successive recesses and projections, leading to acute shifts of light and shade between the vertical surfaces of the buildings. These furnish the whole complex with plasticity, movement and even drama

The Building of the Academy of Athens has a rich sculptural decoration, which was executed over the course of a decade, from the 1870s up to the mid 1880s. The major part of the decoration is the work of the sculptor Leonidas Drosis (1843-1884), Professor at the Scholeion Technon, as the Polytechnic was then known, who had studied in Munich and Dresden on a scholarship from Simon Sinas.
The main sculptural decoration is found on the pediment of the entrance to the Academy. It consists of a representation of the birth of Athina, sculpted in the round. This masterly work of art is a multiple-figured composition, based on a design by the great Austrian painter Karl Rahl. It is the work of Drosis and elicited the first prize at the exhibition of Vienna in 1872.

The terra-cotta sculptures adorning the eight smaller pediments of the building's two wings, are based on designs by Hansen. These works by the Polish sculptor Franz Melnitzki, depict Athina as patron of agriculture, small industry, shipbuilding and the sciences in general.

On either side of the building's prostyle there are two statues: On the right that of Apollo the guitar-player (3.71 m. high), and on the left that of Athina the defender (4.11 m. high). Both are mounted on pillars in the Ionian rhythm (the overall height is 23.25 m.), and are works by Drosis.

In the forecourt to the entrance of the Academy, there are two more statues (2.40 m. high), both seated; on the left that of Plato and on the right that of Socratis. The models for these statues were executed by Drosis and they were then sculpted out of marble from the mountain of Penteli by the Italian sculptor Piccarelli. They were placed in their present location in 1885.

On the same site there are also marble lamp-posts. Their bases are decorated on all four sides with heads of Dias in relief, and on the four corners with owls sculpted in the round.