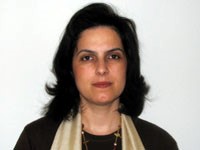 Olga Karagiorgou graduated with distinction from the University of Athens (Department of History and Archaeology) and continued her studies at the University of Oxford (Christ Church): M.Phil. in ByzantineStudies (1995), D.Phil. in Byzantine Archaeology (2001). She was a postgraduate scholar of the Greek Archaeological Committee, U.K., the British Academy, the A. S. Onasis Foundation, the Dumbarton Oaks (Washington, D.C.), and a postdoctoral fellow of the National Hellenic Scholarship Foundation (I.K.Y) and the Alexander von Humboldt-Stiftung. She taught at the Oxford University (2004) and at the Hellenic Open University (2010-2014) and worked for the Prosopography of the Byzantine World Project, King's College, London (2001-2004). Since 2004 she holds a research position at the Research Centre for Byzantine and Postbyzantine Art of the Academy of Athens.

She has participated in excavations within Greece and abroad (Syria, Turkey), as well as in many national and international conferences with papers related to her research interests: Late Antique Studies (urban development, economy, trade with emphasis on amphorae and marble), Byzantine sigillography and prosopography, Byzantine iconography. In November 2013 her research proposal on the “Institutional and Social History of Asia Minor” was financed by the «ARISTEIA II» award of the National Strategic Reference Framework, NSRF 2007-2013 with the amount of 200.000 euros.

She holds the position of the General Secretary of the Greek Committee for South-Eastern European Studies (http://eesnae-ekene.gr/) (elections of October 2015) and she is a member of the Executive Committee of the Association of the Researchers of the Academy of Athens (S.E.P.A.A.) (elections of December 2016).

For a detailed CV and her list of publications, see the attached documents.